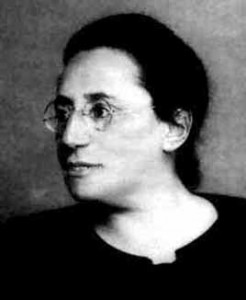 The Mother of Abstract Algebra

Amalie Emmy Noether, better known as Emmy Noether, was born on March 23, 1882 in Erlangen, Bavaria, Germany. Noether’s father, Max Noether, was a distinguished mathematician and a professor at Erlangen. Noether’s education was the standard for upper middle class girls, she learned domestic skills, and studied the arts, languages and arithmetic. Since girls were not allowed to attend college, she went to a general ‘finishing school’ and became a certified teacher of English and French for Bavarian female educational institutions.

Nonetheless, Noether never worked as a language teacher. Instead she decided to pursue a university education in mathematics, a very difficult path for a woman at that time. Women were allowed to study ‘unofficially’ at German universities, but in order to take a course they needed the professor’s permission. Noether obtained permission to sit in on courses at the University of Erlangen from 1900 to 1902, and she audited classes at Erlangen as one of two women among thousands of men. In 1903 she took and passed the matriculation examination in Nürnberg.

She then entered the University of Göttingen, but again as an auditor because she was a woman. In 1904 the University of Erlangen finally let women enroll, so Noether transferred back and in 1907 she obtained her doctorate after working under the German mathematician Paul Gordan also known as the king of invariant theory. She worked with Gordan on David Hilbert’s basis theorem of 1888 which had led to an existence result for finiteness of invariants in n variables. Gordan looked at constructive methods to arrive at the same results; as a result, Noether’s doctoral thesis involved what she would later call ‘computational algebra’, it followed Gordan’s constructive approach and listed systems of 331 covariant forms.

After completing the doctorate the normal progression to an academic post was the habilitation, the extra post-doctoral qualification needed to lecture at a German university. However, this opportunity was still not open to women, so Noether went on to work at the Mathematical Institute of Erlangen from 1908 to 1915, without pay or title. During this period she collaborated with the algebraist Ernst Otto Fischer and started working on the more general and theoretical algebra for which she would later be recognized.

Noether’s reputation grew quickly as her publications appeared. In 1908 she was elected to the Circolo Matematico di Palermo, and in 1909 she was invited to become a member of the Deutsche Mathematiker-Vereinigung, the German Mathematical Society, and to address the annual meeting of the Society in Salzburg. She also addressed the Society’s 1913 meeting in Vienna. From 1913 Noether occasionally lectured at the University of Erlangen, substituting for her father.

In 1915 the German mathematicians David Hilbert and Felix Klein invited Noether to return to Göttingen. They persuaded her to remain at Göttingen while they fought with university authorities to have her officially on the Faculty of the Göttingen University. It was a long battle and there were many setbacks, but in 1919 she was finally granted permission to obtain her habilitation. During this time Hilbert had allowed Noether to lecture by advertising her courses under his own name. For example, a course given in the winter semester of 1916-1917 appears in the catalog as <<Mathematical Physics Seminar: Professor Hilbert, with the assistance of Dr. E. Noether>>.

In 1915 she joined the Mathematical Institute in Göttingen and started working with Klein and Hilbert on Einstein’s general relativity theory. In 1918 she proved two theorems that were fundamental for both general relativity and elementary particle physics. One of these theorems is still known as Noether’s Theorem, it proves a relationship between symmetries in physics and conservation principles. This result in the general theory of relativity was praised by Albert Einstein in a letter to Hilbert when he referred to Noether’s “penetrating mathematical thinking.” Moreover, her work in the theory of invariants led to the formulation of several concepts of Einstein’s general theory of relativity. Hilbert and Einstein interceded for her and in 1919 she obtained permission to lecture, although still without a salary. In 1922 she became an associate professor without tenure and began to receive a small salary. Nevertheless, Noether still faced many difficulties, not only because of prejudices against women, but also because she was Jewish, a Social Democrat, and a pacifist. 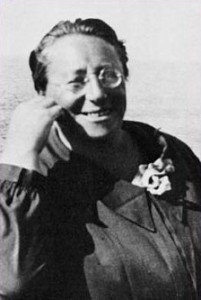 During the 1920′s Noether moved away from invariant theory to work on ideal theory. She did fundamental work on abstract algebra, working in group theory, ring theory, group representations, and number theory; as result, she produced an abstract theory which helped develop ring theory into a major mathematical topic. Her mathematics would be very useful for physicists and crystallographers, but it was controversial at that time. There was debate whether mathematics should be conceptual and abstract (intuitionist) or more physically based and applied (constructionist). Noether’s conceptual approach to algebra led to a body of principles unifying algebra, geometry, linear algebra, topology, and logic. Her paper Idealtheorie in Ringbereichen (1921) was of fundamental in the development of modern algebra. In this paper she gave the decomposition of ideals into intersections of primary ideals in any commutative ring with ascending chain condition. (Lasker, world chess champion, had already proved this result for polynomial rings.) In 1924 the Dutch mathematician Bartel Leendert van der Waerden came to Göttingen and spent a year studying with Noether. After returning to Amsterdam van der Waerden wrote his book Moderne Algebra in two volumes; what’s more, the major part of the second volume consists of Noether’s work. From 1927 and on, Noether worked on non-commutative algebras in collaboration with the German mathematicians Helmut Hasse and Richard Brauer. Much of her work appears in papers written by colleagues and students, rather than under her own name.

From 1928 to 1929 she was a visiting professor at the University of Moscow, and in 1930, she taught at Frankfurt. Further recognition of her outstanding mathematical contributions came with invitations to give a plenary lecture at the International Mathematical Congress at Bologna in 1928 and again at Zurich in 1932. That same year she was awarded the prestigious Alfred Ackermann-Teubner Memorial Prize for the Advancement of Mathematical Knowledge. In addition to teaching and research, Noether helped edit Mathematische Annalen.

In 1933 her mathematical achievements counted for nothing when the Nazis came to power, for she was dismissed from the University of Göttingen because she was Jewish. Afterwards, she accepted a visiting professorship at Bryn Mawr College in the United States and also lectured at the Institute for Advanced Study in Princeton. The guest position was extended, but in April 1935 she had surgery to remove a uterine tumor and died from a postoperative infection.